Hill of Crosses for travellers

Hill of Crosses near the Meskuiciai, on the left bank of the Kulpe River, sits the famous Kryziu Kalnas (HILL OF CROSSES). After the rebellions during the 1800s, people from near and far began to put crosses on the hill in memory of relatives who had been killed. Normally, crosses are put on graves, but since many of the rebels’ graves were unknown, the Hill of Crosses became a symbolic grave for all those who had been killed. 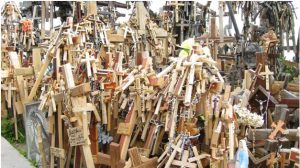 In 1963, a memorial rock was placed on the Hill of Crosses to commemorate the 100th anniversary of the 1863 Rebellion. The number of crosses on the hill continues to increase to this day. Now there are about 15 thousand crosses standing on the Hill with about 40 thousand smaller crosses hung on the large ones. The crosses used to be placed by Stalin deportees, political prisoners and believers, who prayed God for freedom and independence of Lithuania.

Hill of Crosses is a center of  Catholicism

After the restoration of Lithuania’s in-dependence, the Hill of Crosses became one of the centres of Catholicism in Lithuania. Solemn festivities were arranged on the Hill of Crosses in September of 1993, when Pope John Paul II visited Lithuania. Holy Father said such words: “Thank you Lithuanians for this hill of crosses testifying a great faith of this land for Europe and entire world.”