History of the Hill of crosses in Lithuania

The monument of Lithuania

The Hill of Crosses is an historical and architectural monument, a unique composition of folk art. It attracts people with its peace, spirituality, authenticity, and sacred nature. The oblong mound, somewhat similar to a saddle, stands on a plain and is surrounded by the valleys of Kulpė Stream and its nameless tributaries.

The hill itself is the Jurgaičiai-Domantai mound, which sits next to a former ancient village that was here in the 13th-14th centuries. It became a sacred site in the 19th century.

Crosses on the hill

It is said that the first crosses were erected here by the next-of-kin of the rebels that fell in the 1831 rebellion. Those family members were not permitted by the Tsarist reign to pay proper tribute at the graves of their relatives. Even more crosses appeared after the rebellion in 1863. At that time, the traditions of visiting and erecting crosses on the hill were being formed. The Hill of Crosses became a place of vows.

According to another version, many crosses appeared after the Virgin Mary and baby Jesus appeared on the mound in the 7th decade of the 19th century; it was she who supposedly encouraged people to put crosses at this place. In 1850, there were 17 crosses, from 1895 to 1898 the number increased to 180, and in 1938 there were over 400 crosses. The number of crosses also grew during the period of Soviet occupation; in 1960, there were 2,500 large crosses alone. 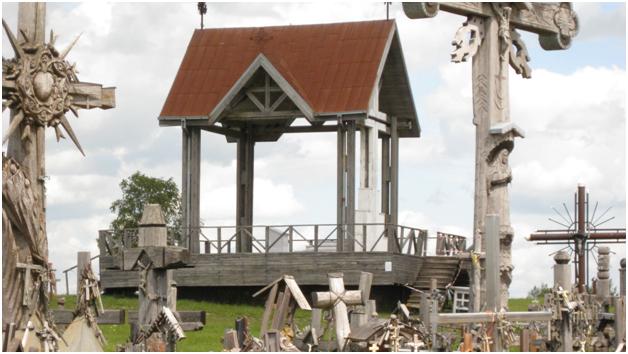 In the beginning of the 20th century, the hill was already quite well known. It was being visited by a lot of people, and services and feasts were taking place here. The Soviet government was not happy about the hill and its crosses. Thus, the “demolition” period, which lasted for almost 20 years, started.

In 1958, the collective farm Meškuičiai began digging gravel on the Hill of Crosses. In 1961, the hill was surrounded by bulldozers. Wooden crosses were damaged or burnt, metal crosses were taken to the scrap dump, and stone and concrete crosses were smashed, buried or thrown into Kulpė Stream.

Every year the authorities destroyed 500 crosses under the excuse that they were only taking away the crosses “of no artistic value”. Later, they announced a swine-fever and rabies “epidemic”, it was forbidden to enter the territory. The road to the hill was even guarded by police. At the end of the 1980s, it was chosen to weir Kulpė, which had already been turned into an effluent pitch of sewerage, and to flood the hill. However, new crosses kept appearing every night, and with every demolition (there were four of them), the Hill of Crosses continued to spring back to life.