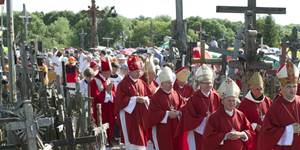 Some details about the Holly mass in 2014

Visit popular place in Lithuania the Hill of Crosses

The Hill of Crosses has about 100 000 crosses. It is said that first crosses were erected here by the next-of-kin of the rebels that fell in the 1831 rebellion. The Hill of Crosses ia an historical architectural monument, it is a unique composition of folk art. The Hill of crosses atract’s people with it’s peace, spirituality, authenticity and sacred nature. The hill of crosses was visited by Pope John Paul II. Even more crosses appeared after the rebellion in 1863. At tht time the traditions of visiting and erecting crosses on the hill of crosses were being formed. The Hill of crosses became a place of vows in Lithuania. In the beginning of the 20th century, the hill was already quite well known. It was being visited by a lot of people, and services and feasts were taking place here. Now It has about 100 000 cross.

Cross from unknown Pilgrims. There are thousands of crosses on the Hill of Crosses.

Visit Other Places in Lithuania