Cross from Germany on the Hill of Crosses 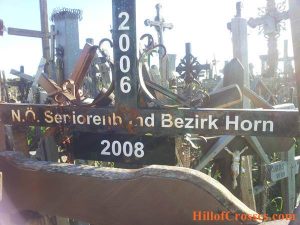 will be answered when they visit the Hill of crosses and leaving their own representation of a catholic cross there.

There is nothing fancy about this cross here and it is in fact so common it is buried among the pile of other crosses. However, for this German pilgrim, this cross is everything.

The hill of crosses is a popular site for pilgrims although there are no reports as how this practice originated. However, there is a belief that pilgrims started to leave their crosses on the hill after the Uprising in 1831. As of the 2006 count, there are around 100,000 crosses on the hill.